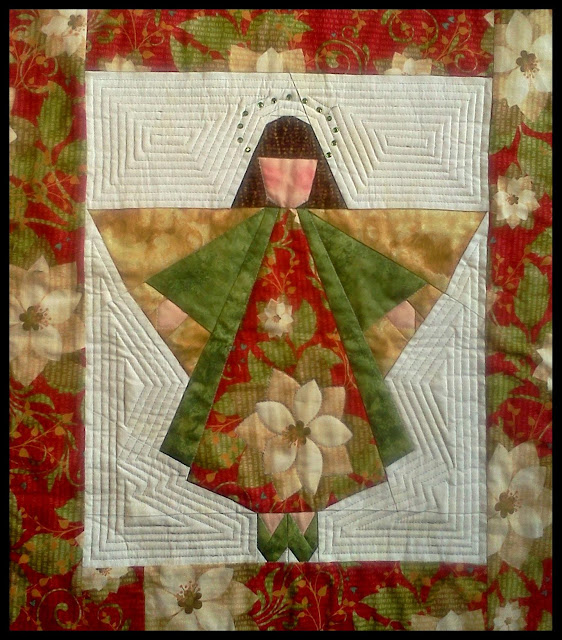 My Christmas Angel pattern is now available for immediate download on Craftsy! The pattern is $10 and is ready for you to turn into wonderful gifts or holiday decorations. Follow this link to purchase the pattern: http://www.craftsy.com/pattern/quilting/home-decor/christmas-angel-too/34062?rceId=1443697389730~5su6wwx6
Posted by Larkspur Lane Designs at 7:06 AM No comments: 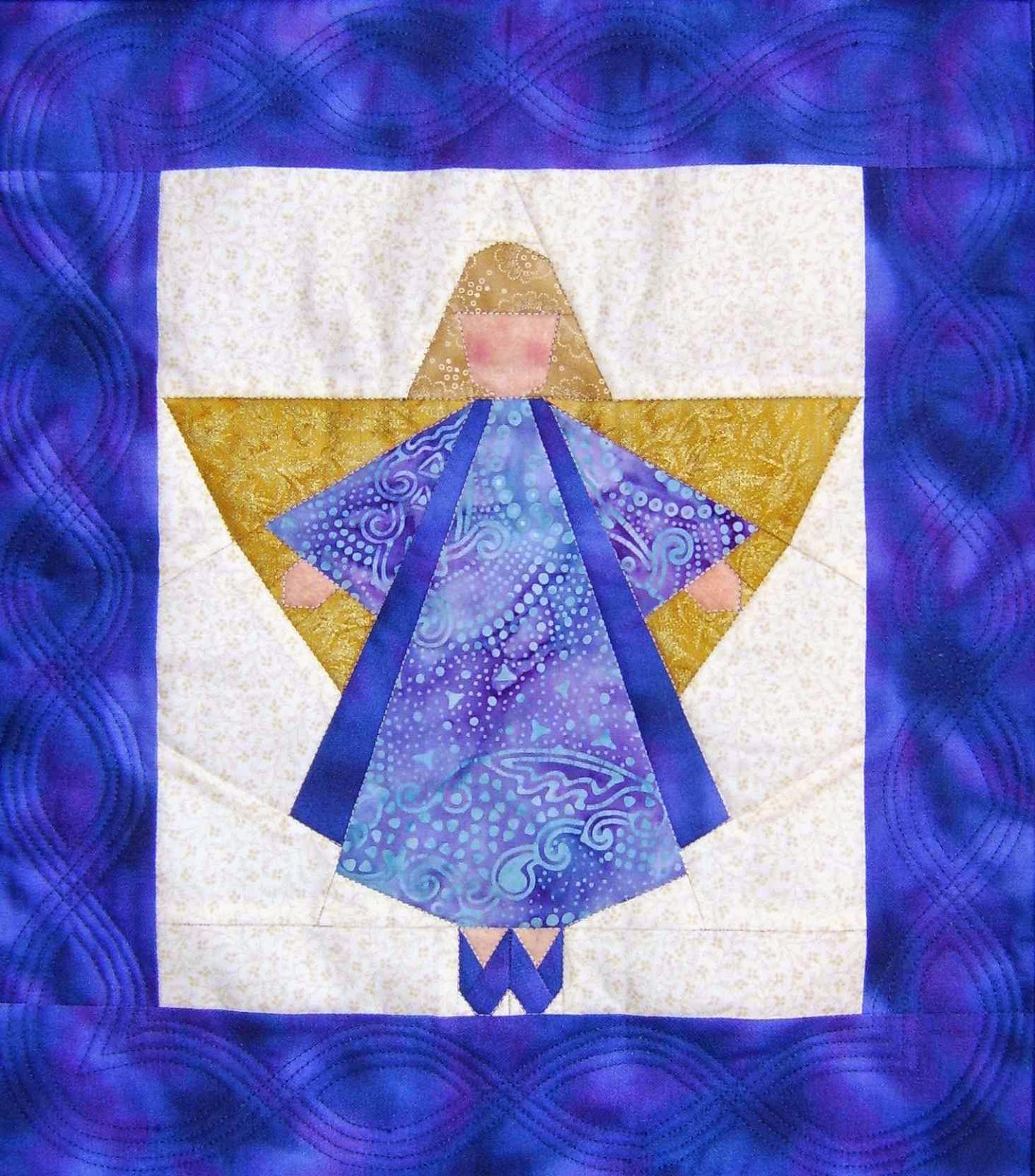 This is my design called Lexa's Angel. The pattern is available on Craftsy. It is an elegant, quick and simple project you still have time to make for Christmas! The pattern sells for $10 and you can download it immediately and get started.  http://www.craftsy.com/pattern/quilting/home-decor/lexas-angel/33816
Posted by Larkspur Lane Designs at 7:30 AM No comments: 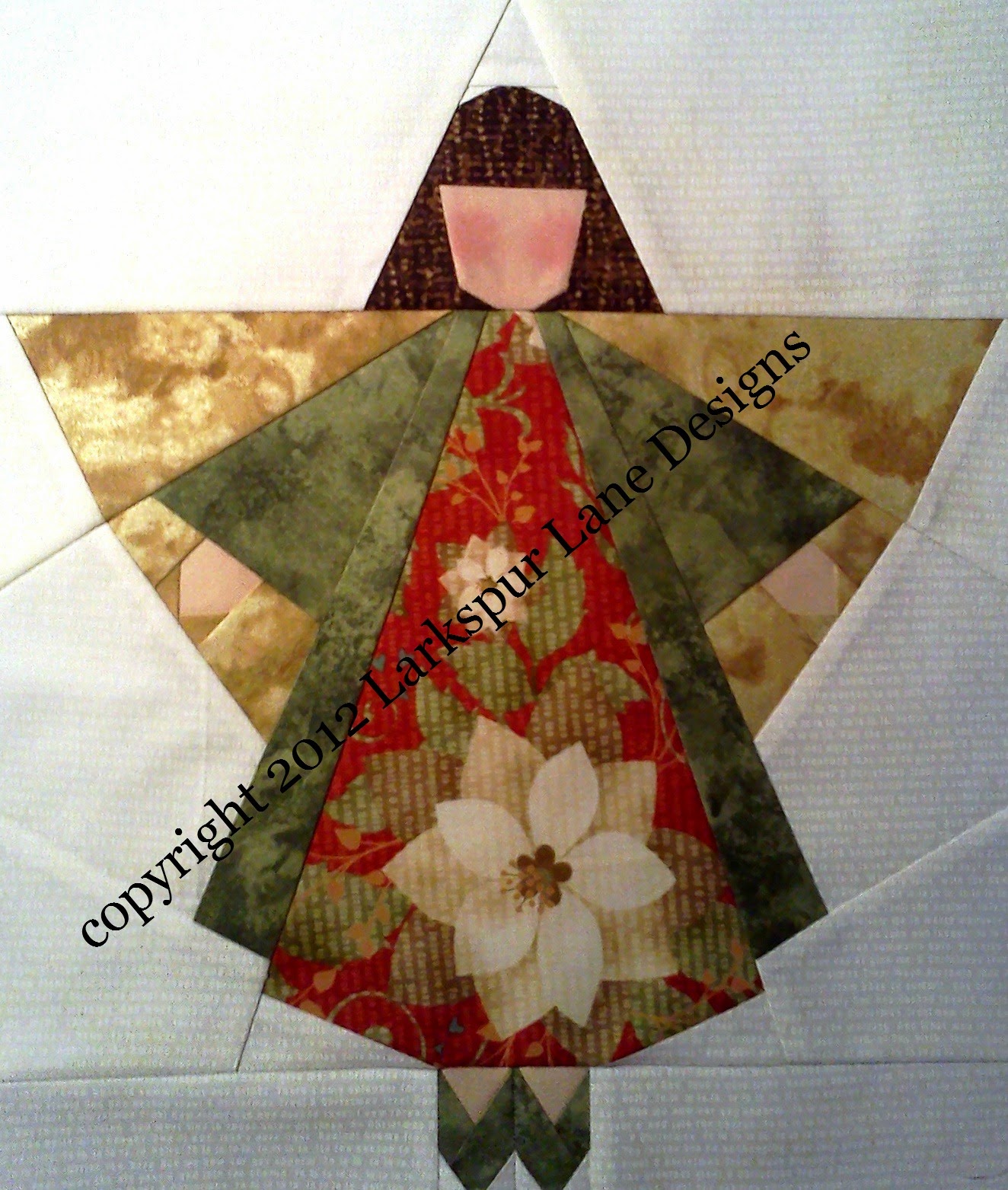 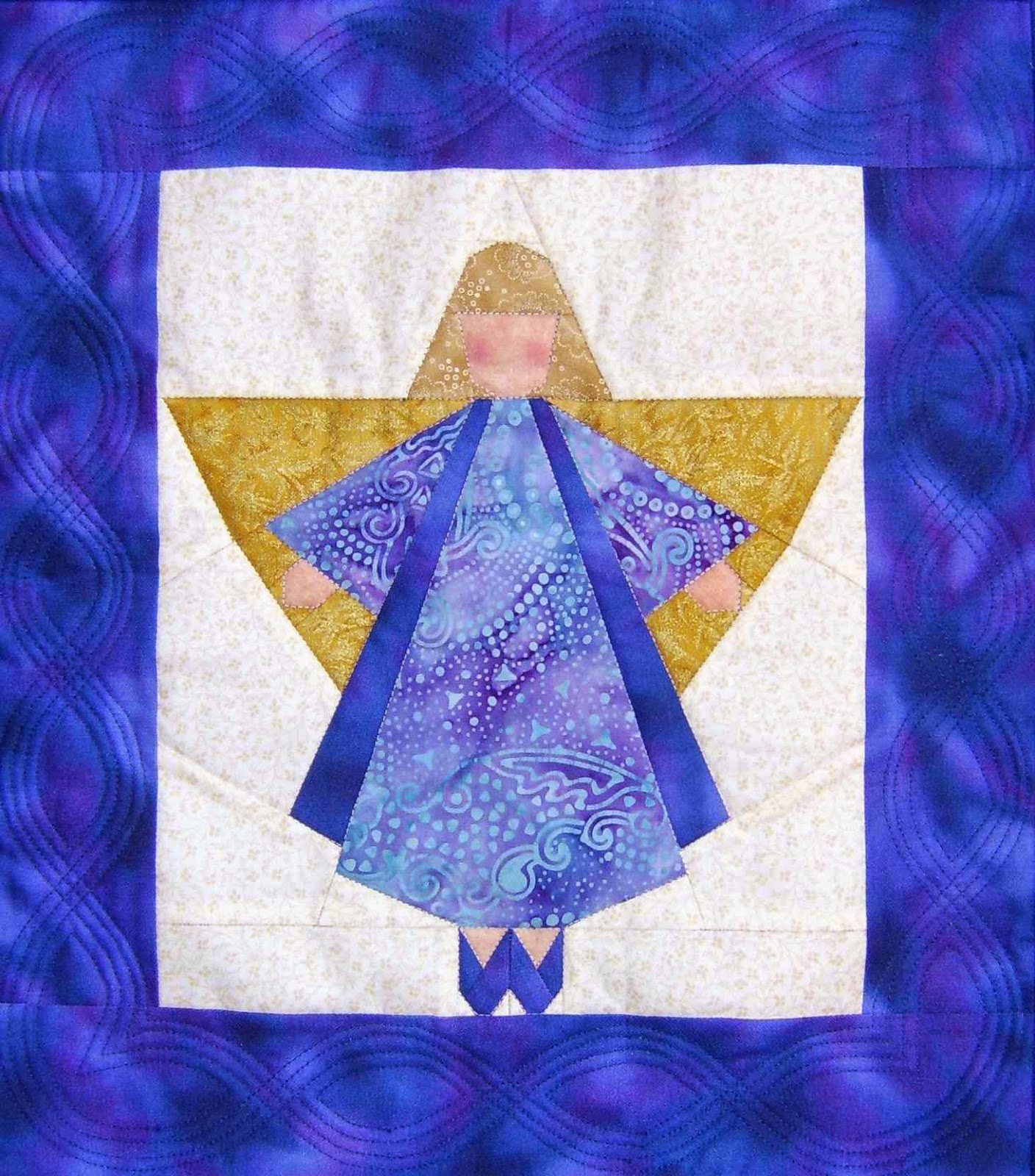 I haven't posted in a long time for a number of reasons, but with Christmas coming up my Christmas Angel pattern has been receiving a lot of attention so I wanted to post some information about it. The pattern is available directly from me via email or regular mail. It costs $10 and I can take payment by check or Paypal. The version with the blue border is called Lexa's Angel and is available on Craftsy.com. http://www.craftsy.com/pattern/quilting/home-decor/lexas-angel/33816 It is a little smaller than the Christmas Angel pattern.

By changing your fabric choices you can modify the pattern to work for any season or almost any occasion. I have done a spring version as well as a version with orange as an accent color, which I'm told is the color for leukemia. 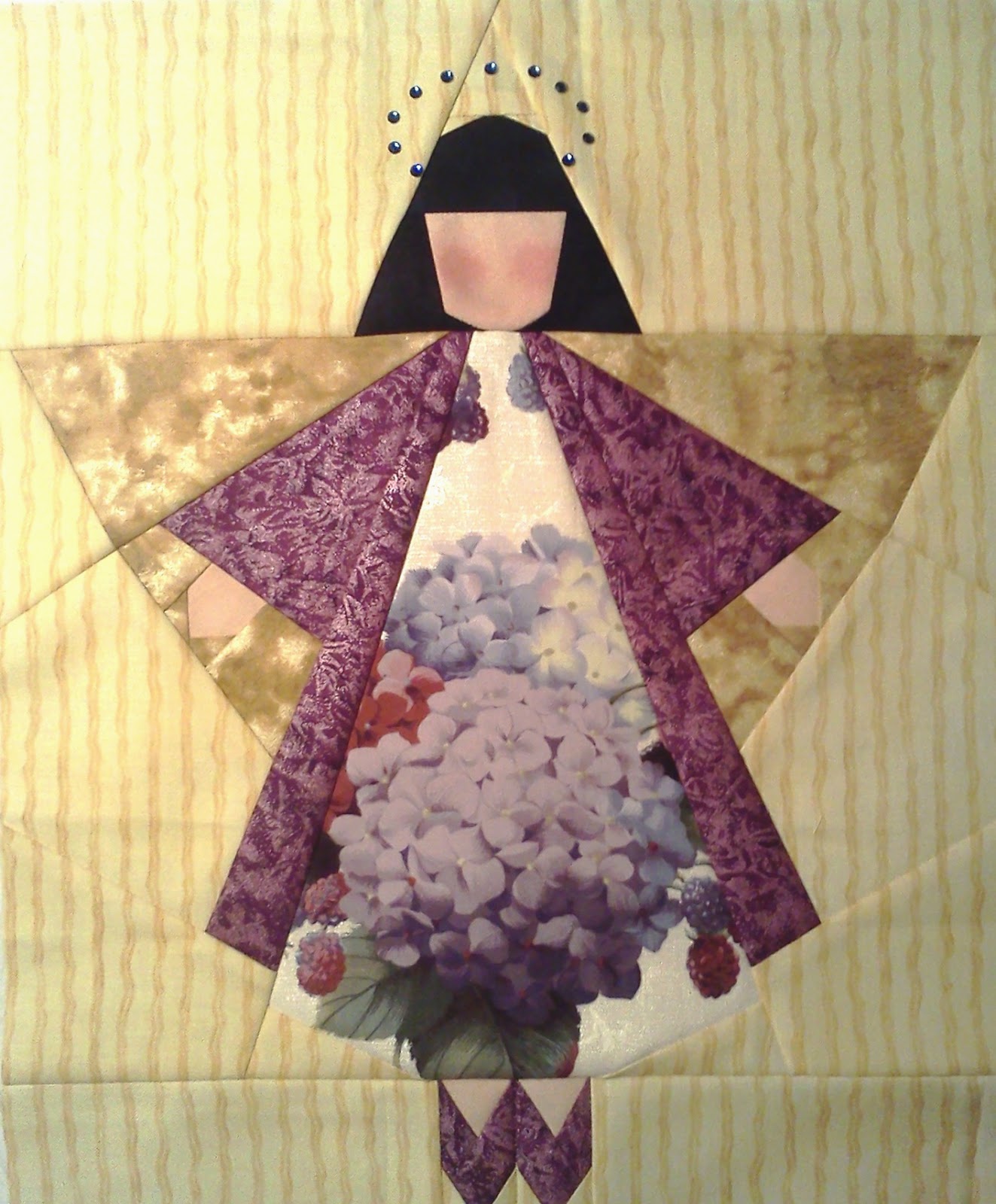 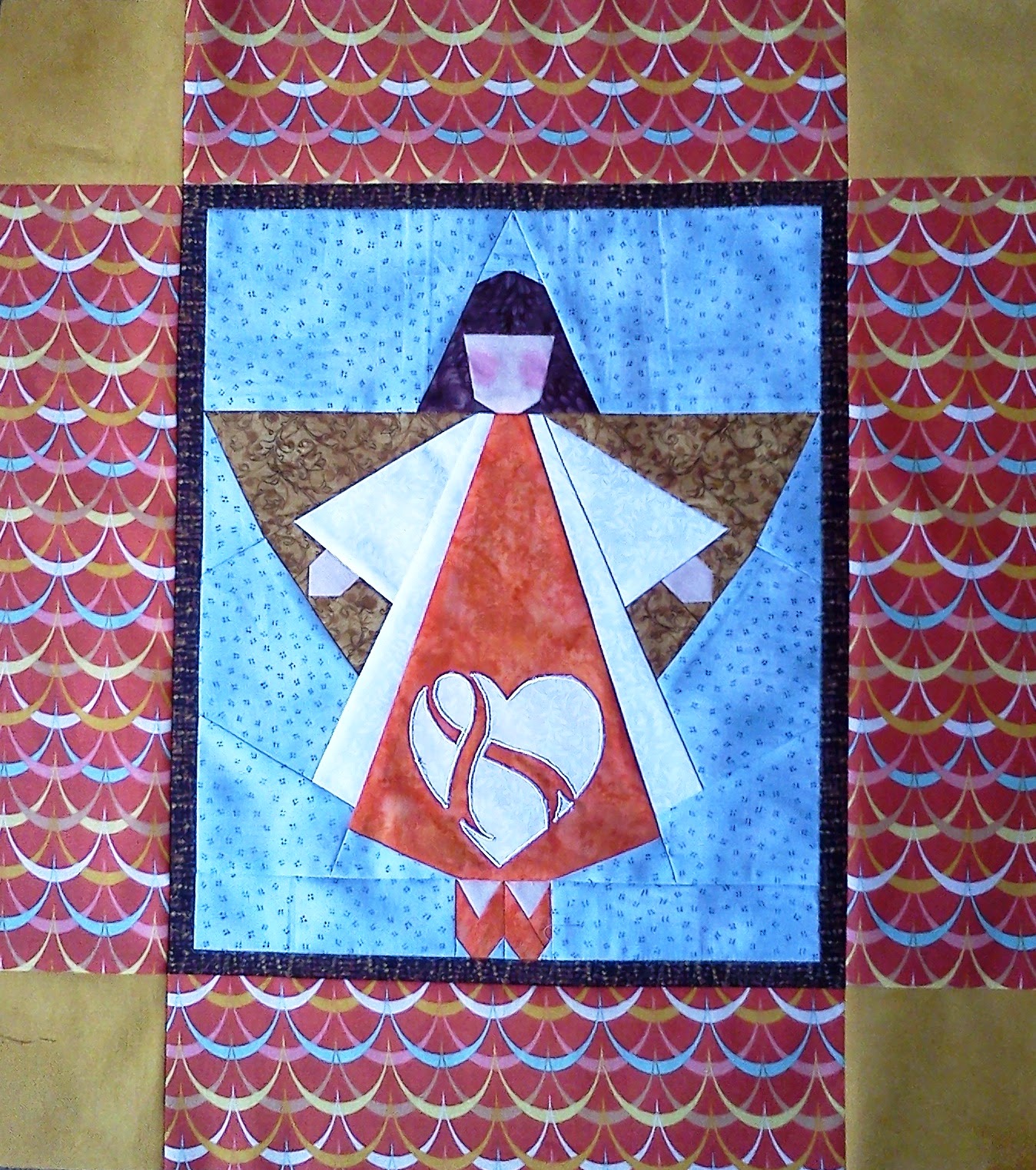 Posted by Larkspur Lane Designs at 10:03 AM 2 comments: 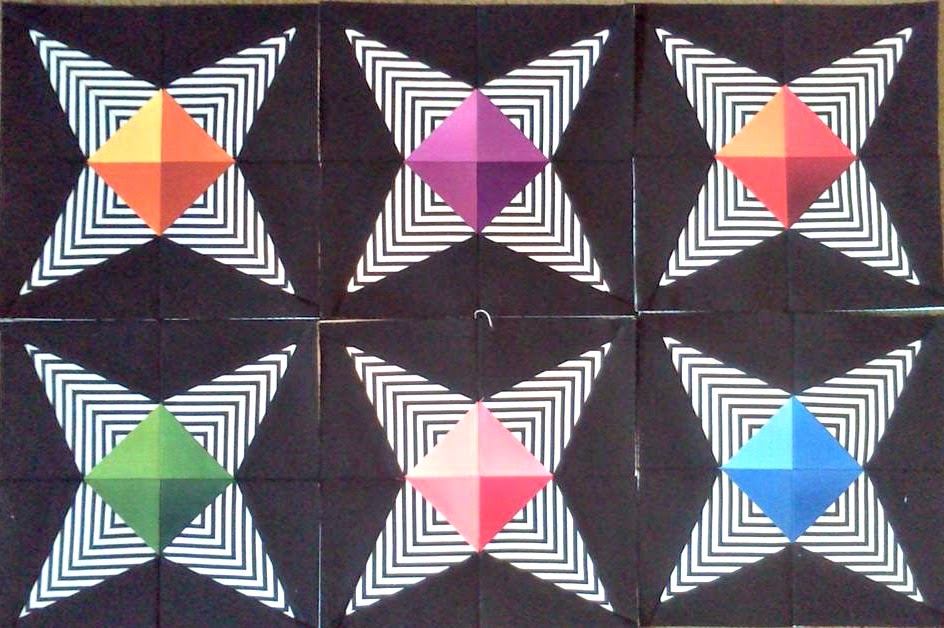 I know its been awhile since I posted, but that doesn't mean I haven't been working!
This is a picture of my latest design. I still have 3 more blocks to make and decide on borders. I am so happy with the results, so far, but I'm having trouble naming it.

I had the most amazing experience yesterday that I just have to share!

I've been helping a friend at an ice cream place and happened to be working alone yesterday when a family came to the window. There was a young woman who looked to be about 18 or 19, her younger brother, and her mom and dad. I remember thinking that this young girl could be my own daughter, but not because she looked like me or even like my own daughter. I'm not sure why I felt that way but the feeling was so strong I actually had to stop myself from saying it out loud to her.

After waiting on the girl, her brother and her mom, the three of them headed back to the car. Now, after turning my attention to the dad, I realized he looked familiar to me. When I told him I thought I knew him, he told me his name, and sure enough, I did know him. About 20 years ago, I was dating a guy that worked with the man standing in front of me. I had met him and his wife and became friends with them through my then boyfriend. After getting to know them, I found out they had been trying to have a child and had gone through a couple rounds of fertility treatments that were very expensive but unsuccessful.

It was at this time one of my best friends discovered she was pregnant. She knew she didn't have the ability or desire to care for another child on her own, so she decided adoption was the best solution. I got my friend in touch with this couple and after they worked out the details, they adopted my friend's baby. That "baby" was the young woman I had felt so drawn to yesterday!

A few minutes after I had finished talking with the dad and he rejoined his family in the car, the mom and young girl came back to the window. The mom told me she wanted to introduce her daughter to the woman that was the reason she came to be part of their family. I was honored to know that's how she felt about me, but realize my role was very small and it truly was a case of being in the right place at the right time.

When I told my Monday quilting group about my experience, they told me it was a Christmas miracle. I don't know about that but I felt it was something I needed to write down and share, so here it is!
Posted by Larkspur Lane Designs at 8:57 PM 4 comments:

My newest design is called DEAR SANTA, I'VE BEEN NAUTICAL, and the pattern is finally ready! The signal flags spell out Merry Christmas and the included embellishments add to the Christmas theme. This design is perfect for anyone that lives near the water or wishes they did! The design is mainly paper pieced but there is a little bit of applique as well. The pattern is only available from me right now and I can be reached via email or by commenting on this post. My email is larkspurlanedesigns@yahoo.com

Posted by Larkspur Lane Designs at 8:46 AM No comments:

Friends are the family you choose. I'm not sure if I chose them or they chose me but I have a wonderful friend family!

I just came back from the most wonderful weekend with 2 of my friends. They are supportive, kind, generous and truly amazing people. The 3 of us stayed at a B & B in Mayville, NY, owned by my newest friend family member, Margo Stuart. I was fortunate to meet Margo earlier this year when I was asked to teach at a quilt retreat in February. I am so lucky to own a little cottage not far from Margo's place but we close it up for the winter and it isn't big enough for more than one or two quilters to sew in at a time, so it has never been  an option for a quilt retreat. And I am so glad it isn't because I may have missed out on meeting Margo!

Ariel's Bed and Breakfast is a magical place to stay at any time of the year. Margo is an amazing cook with a wicked sense of humor and I love being around her. She is also a quilter, so we always have a lot to talk about. She is very well-traveled and has a million wonderful stories to tell so if you can get her to sit for more than a minute you are in for a treat!

I'm already looking forward to my next visit!

Here is a link to her website if you're planning a trip to Western New York and looking for a great place to stay:
http://arielsbb.com/

Not many things can drag me away from home at this time of the year but the reason I was in the area is that I was invited by Joy Reich, who owns Calico Patch Quilt Shop in North East, PA, to do a pattern signing on Sunday, December 8th, as part of North East's Sugar Plum Weekend. It was very well attended and I got to see some old friends and meet some people I've only known through Facebook. What a great time!
Posted by Larkspur Lane Designs at 8:41 AM 1 comment:

Larkspur Lane Designs
I have been quilting since 2000 and started my pattern company in 2003. I have had 11 of my original designs published in magazines, so far, and hope to have more in the near future.