I have 2 classes scheduled at one of my favorite local quilt shops--Quilter's Corner in Finleyville, PA. Here is a link to their class list: http://www.quilterscorner-pa.com/newsletters/print_news/print_news.php
There are so many wonderful projects in their newsletter I'm sure you'll find something you're interested in learning how to do!
Both of my classes are my original designs and are paper pieced.
This project is a wall hanging but could also be used to make pillows. One of the things I teach in my paper piecing class is how to use directional fabrics in a paper pieced project. Its not as difficult as you might think!

Posted by Larkspur Lane Designs at 9:42 AM No comments: Links to this post

In Memory of Tracy A. (Thomas) Angelo

One year ago, today, I held the hand of one of my best friends as she took her last breaths. I was 2 when she was born and although I don't remember the first time I met her, she was such a big part of my whole life that it seemed she had always been there. I am so lucky she chose me to be part of her life. I have 3 sisters that she could have chosen to be close to just as easily She taught me so much, (not always good things) and we had a lot of fun together. We also had our fights but we got over them quickly.

We were already family, but if my grandparents hadn't adopted her I probably wouldn't have even known her. We grew up together, literally. She had 2 natural brothers and 2 natural sisters but I only know one of the sisters. Sadly, the others chose not to be part of her life. They missed out.

Describing her is almost impossible. I have to be careful when I tell some of my stories because if you didn't know her you would think she was an awful person, especially since my best stories are ones in which we were misbehaving. She was very outspoken and said what she meant, even if it meant hurting someone. Personally, I would rather know exactly what someone thought about me than to learn later that everything you believed was a lie. Been there, done that.

I can hardly believe its been a year. I think of her every day, hell, I talk to her every day. She shows up in my dreams occasionally. One dream, in particular, stands out because I truly believe she was there. It was the night before her funeral and the dream was very vivid. I assumed I was in a quilt shop because of all the bright colors but realize now I have no idea where I was. Tracy was in her wheelchair and I needed to pick her up for some reason. I had done this countless times before but towards the end of her life, her left shoulder had become stiff and very painful if moved. Twice, I made her cry because of the pain when I moved her. After I picked her up, she looked at me, smiled, and said "You didn't hurt me." At the end of the dream, I was standing beside her wheelchair looking down at her. She got this grin on her face that, if you knew her, told you she was up to something. I asked her, "What are you doing?" She put her hands on the armrests of her wheelchair, pushed herself up and took a step away from it.

If you've made it all the way to the end of this post, thank you for reading it. I wrote it more for myself than anyone else  because I couldn't let this day go by without making note of the important role Tracy played in my life. My message is to appreciate the people in your life--the ones that make it better just by being there, the ones who believe in you and support you. Don't worry about the ones who tear you down, forgive them and walk away.

Posted by Larkspur Lane Designs at 9:02 AM 4 comments: Links to this post

I've learned a couple of things that I would like to pass on:

1.There is always something good that comes out of even the worst situation. You just need to keep
your eyes open.

2. Never hate someone just because someone else thinks you should.

3. Karma is a b*tch and she doesn't need your help. Just sit back and watch the show.

4. Do good works and it will come back to you.

5. NEVER accept less than you deserve.

I may add to this list later but these are a couple of my most recent lessons.
Posted by Larkspur Lane Designs at 10:23 AM No comments: Links to this post 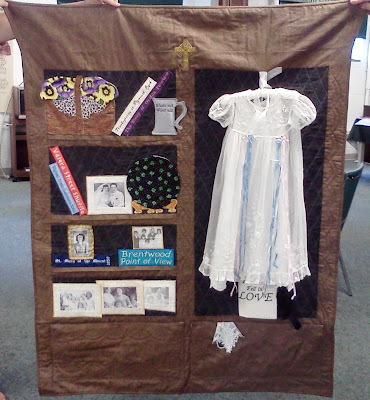 This is a picture of a quilt I have been helping my friend make. It was a birthday gift for her mom that she presented at a surprise party this past weekend. There are a lot of special details in this quilt like the christening gown that was worn by all of the children and all of the grandchildren in the family--23 people in total. My friend thought it was time to "retire" the gown before it was damaged or lost so we designed the quilt with a special place for it to be featured. Under the hem of the dress, there is a fabric book with the names of all of the people who wore the gown as well as a family picture. Lots of family photos were included on the shelves and the books were embroidered with the names of the streets that the quilt recipient lived on. Buttons will be added on the "drawers" at the bottom of the quilt as drawer pulls. This quilt was a lot of fun to work on and has inspired me to make one of my own...eventually!

Posted by Larkspur Lane Designs at 8:47 AM No comments: Links to this post

Whew! I need a break! 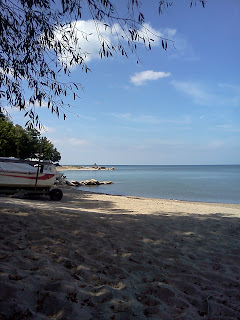 What a crazy couple of weeks I've had! One of the highlights has been the opportunity to teach a workshop for a wonderful group of ladies from Erie, PA. The Hands All Around Erie Quilt Guild invited me to teach a 6 hour workshop in paper piecing. I showed them my tricks for using directional fabrics as well as how easy it is to paper piece a Y seam. I had SO much fun with the group that I decided to join their guild! Since Erie is 2 hours from my home in Pittsburgh, I won't be able to make it to every meeting but I hope to make it to the summer meetings. The picture above is the view I enjoyed while eating lunch. The following evening, I was the featured speaker at their meeting where I got the chance to show all of my quilts and tell some of the stories behind them.

Before I headed up to Erie, I had to drop off the center panel for the Whitehall Library quilt I've been working on so it could be displayed at the Whitehall Community Day. We didn't want to give away too much of the final design but we wanted to make sure people could get an idea of what the finished quilt will look like.


The last 4 days, I've been helping a friend with a quilt that is a gift for her mom. She is presenting it today and I can't wait to hear about her reaction! I'm so excited to post a couple of pictures but I promised I would wait until the party is over.
Posted by Larkspur Lane Designs at 9:45 AM No comments: Links to this post

Larkspur Lane Designs
I have been quilting since 2000 and started my pattern company in 2003. I have had 11 of my original designs published in magazines, so far, and hope to have more in the near future.